TITANIC
I have always been moderately enthralled with the history of the Titanic.  Okay...maybe not moderately....majorly.  I have been know to be quite a spaz when it comes to the history of the Titanic.  I have several books on the subject, picture books, fictional books, non-fiction books, documentaries, etc.  I even have Polar the Titanic Bear book that I take out once a year and read to the kids....but it is in MYbookshelf, not theirs.  So I am pretty protective over my Titanic stuff.
I was SO excited when I heard I would be going to the Titanic Museum in Branson!  AND....we were staying at the Best Western RIGHT NEXT DOOR!  So I could look out at it every time I looked out the window!  It was like the people who booked my room, KNEW I would LOVE to be next to this museum!
I was so giddy when we got up that morning....so excited!
Unfortunately we were unable to take pictures in the museum, but I got some on the outside, and they gave us press photos!  I'll try not to let you down!!
This is what I saw from my side of the hotel! 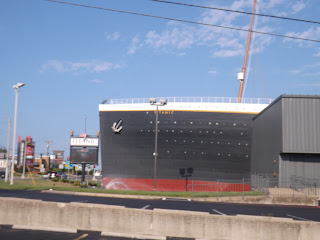 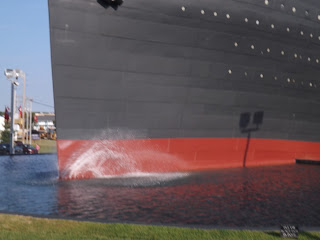 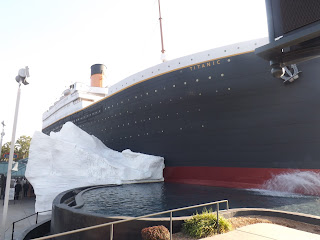 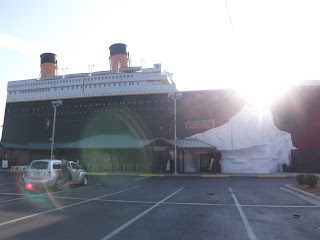 These were the two "crew members" that met us at the entrance. 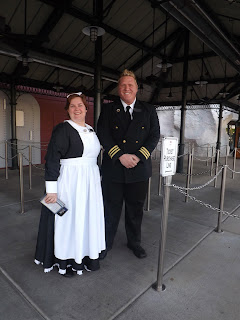 They gave each person a card when they got to the door.  This card is who you "are" for the day.  I was Anna....a young finnish lady traveling with my infant son in second class to the states to be with my estranged husband. 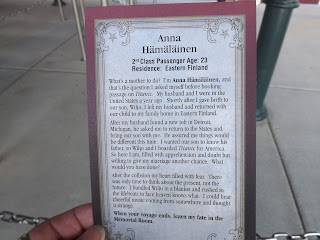 Rhonda was a woman named Irene in first class!  Snot!  :-) 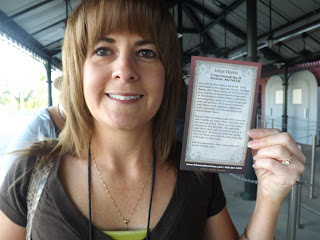 They took a moment to explain the listening devices.  It was a necklace with a telephone looking thing hanging from it.  When you got to an exhibit with numbers, you just had to punch in the numbers, hit enter and listen.  They had one for kids too...a different number to dial in that was very much more kid friendly. 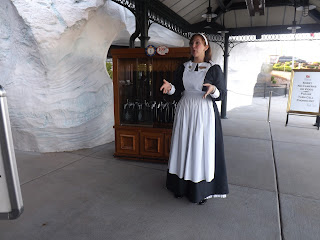 When you first come into the lobby you look up to what looks like a gigantic ceiling fan.  When actually it is THE SMALLEST propeller on the Titanic...and it is HUGE!  It puts it into prospective.  Before you walk in, you get to touch an iceberg that is the same as the icebergs out in the North Atlantic, like the one that was hit by Titanic.  It is truly amazing to try to put this all in my head like a little puzzle.
Here you see the second class cabins.  This is where I would have been as a passenger.  My "fake" person, and me even if I was living then......or even now!  :-)

You can't beat the beauty of the Grand Staircase.  The first time I saw it without YUCK growing on it was the replicated version on the movie by James Cameron, Titanic.  Here I was able to touch it, feel it, see what it was like to actually walk up and down these grand stairs.  It was really surreal.

This is what Rhonda's quarters would have looked like both for her "fake" person and for her!  Funny how we got people that were similar to us in real life!  :-)  It puts into perspective though, the grandiose....how much better the first class were treated.

Here is the captains wheel and it is big and heavy.  It is amazing to me how this monster of a ship was steered with this little wheel though.

The museum was full of artifacts that came from the actual wreckage.  Things were donated by family members much of the time....which made it neat because then there was a name to put with the item.  We were told to look for our name throughout the museum, because you never know when we might run across something that may have belonged to "us".  I never ran across anything that belonged to me, and neither did Rhonda, but it wasn't for lack of looking.

The headset facts were awesome.  I enjoyed listening to everything that they had to say and I didn't have to hush anyone.  I will say, I wasn't fond of the areas that had a number meaning you need to listen to something...and ALSO had someone talking over head about something else.  It was hard to pay attention to either one of them....but I managed.  The content was too good NOT to manage.  I would do everything in my power to hear every word that was being said!
Some of the things in the museum were unbelievable...letters sent to friends and family, journals, steamer trunks, eyeglasses, dining room utensils, plates, dish ware, even a wedding band.  I also always wondered what they did AFTER the Carpathia picked up the survivors.  What happened to those poor people who were just floating.  Well, now I know....they went back and did a retrieval mission, picked up the bodies and either buried them at sea, or brought them home.  Because Starline was so broke after this catastrophe, they couldn't afford to pay for the bodies to be shipped to their homes.  So if their families couldn't afford it, then the body was buried at sea.  So sad.
Towards the end of the museum, there was a neat area where you could stick your hand in the cold, icy 28 degree water that was the same temp as the water they sunk into, and see how long you could hold it there.  I made it 14 seconds before my hand was numb and it actually hurt.  Rhonda made it 15, but she didn't want to make it that far....she was just trying to beat me....again!  :-)  I can't even imagine what it must have felt like to have your whole body emerged in that icy water.

Then we had an opportunity to see what it would have been like on the decks as the ship sank.  The difference in slopes and degrees.  The first was pretty easy....everything after that was hard....especially the last one.  I just keep trying to put myself in their shoes....awful.

There were only 20 women that served on the Titanic and 2 boys.  The rest were men.  Most perished, including the 2 young boys, but many survived who helped with the life boats.  Here is a picture representing the crew....of course this would NOT be all of them, there were 200+ crew members.

At the very end was the Memorial Wall etched in glass.  It is very tastefully done.  You go to the class section that "you" are in, then look for your name alphabetically.  If your name is underlined, than you survived.  If it is not, then you perished.  Luckily, both Rhonda, mine and my sons names were underlined!  I don't know how...but we all made it out alive!

I did forget to mention that at the beginning there is a cute little window with two dogs in it.  They were the dogs that were abundant on the Titanic.  They were small lap dogs and could be carried around, hence their popularity.  They were so cute!

At the very end there was an interactive Polar the Titanic Bear on a screen.  He says, "Hello" as you pass by....so you think it is just motion detected....until he mentions something about you...like what you're wearing, your color hair, etc.  It didn't take long before I noticed a small camera above the screen.  So there were several people that carried long conversations with Polar the Titanic Bear!  Very nice Bear he was indeed!

Once we were done, we spent some time in the gift shop.  It is a lovely gift shop.  I was a little sad to be leaving...but next time!!  I really enjoyed myself there!  I am excited to take my kids there as well.  Especially with the kids audio, that should hold their attention!  We'll watch the movie before we go too!  That will help!

Proud Member of The US Family Guide Network